Over the course of the Building Knowledge and Breaking Barriers project, five Community College of Philadelphia history classes worked with primary sources curated from the Presbyterian Historical Society collections, and then wrote research papers using those sources.

These students of Religion in American History, 19th Century US History, and an English Composition course on writing a research paper reviewed primary sources in person at the archives, or online. Each student chose a source set that interested her, and then tried to come up with a thesis supported by the primary and secondary sources in that set.

Stephanie Santoro, Maya Holman, Celia Shao, and Christopher Ludd have allowed PHS to display excerpts of their writing to demonstrate the kind of work that CCP students have been doing at and outside of the archives, with primary and secondary sources not found in most textbooks. 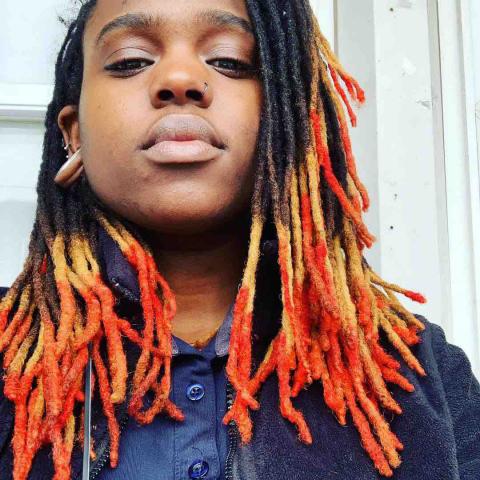 Maya Holman first made her way to the PHS building through CCP Professor Dave Prejsnar's Religion in American History class in the fall of 2018. Out of the six document sets on topics such as the First Great Awakening and the Philadelphia Bible Riots of 1844, Maya chose to write about African American Churches. In her carefully crafted essay, Maya puts forward the thesis that “many freed slaves who migrated to Philadelphia used religion as a bridge to their own personal freedom and salvation.” Maya deftly uses evidence from the two primary sources as well as one of the secondary sources in the source set to support her thesis, and accurately situates these sources within their historical context.

Maya became a Student Exhibitor and will be sharing her installation along with her fellow exhibitors in the Spring of 2021.

"In 1808, Presbyterian preacher Gideon Blackburn arrived in Philadelphia with his slave, John Gloucester. Blackburn, while in Philadelphia, wanted to spread word about his slave, and get him recognition for his ability to convey the word of God. Gloucester had given sermons in Tennessee where he was from, and managed to move all people, black or white and "convince them of their sins" (7). A couple years would pass before he would be freed, licensed, and able to petition for the money needed to build a place of worship (8). He started off in a house in the Cedar Ward district of Philadelphia, with just a handful of men and women. However, as word spread of his abilities, he soon packed the house and moved to an empty lot (9). People often spoke of the moving nature of his voice, the soothing tone of his songs, and the conviction with which he spoke his words. This gathered crowds and flocks of people who were eager to hear what he had to say. By 1811, The first African Presbyterian Church of Philadelphia was founded with Gloucester at the forefront. By 1813 he had several hundred members, white and black, and even held some prominent members of society (10). He drew in crowds from near and far, preaching the gospel, and giving hope to a society held down by the heavy hammer of oppression and fueling racism of the era. Sadly enough, John Gloucester tried for many years to buy his own family out of slavery, and even with donations from his community, his family was not released from bondage until 1819, just three years before he would pass away (11). But John's legacy would live on for centuries and he would be remembered as pious and benevolent himself.

"William T. Catto would also recall the life of John Gloucester, and all that he provided for the minority Philadelphians who had just been freed and had no idea of which direction to go in. He speaks in his book about how John came in to Philadelphia with his owner Gideon Blackburn with a recommendation from the "Presbytery of Union Synod of Tennessee, as a candidate for licensure to labor as a missionary among colored people."(12). He had already been recognized in Tennessee, and he was looked upon to be a voice of a church in Philadelphia. He was freed from Mr. Blackburn, and as stated before, it didn't take long before he decided to tend to ministry. John Gloucester was a revolutionary missionary for the Gospel, who "had to labor almost alone in this arduous work" (13). What he provided to the oppressed people were visions of hope, equality, peace, and an end to the violence and destruction that had preceded them and that they had witnessed themselves."

Catto, William T. A Semi-centenary Discourse, Delivered in the First African Presbyterian Church, Philadelphia … with a History of the Church from Its First Organization … also, an Appendix, Containing Sketches of all the Colored Churches in Philadelphia. Philadelphia: J.M. Wilson, 1857. Call number: BX 9211 .P49104 F505 1857 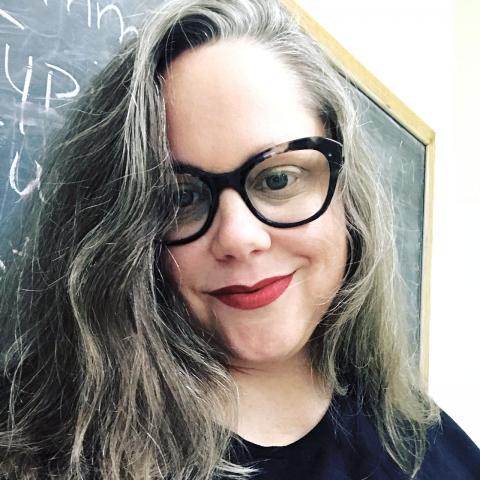 Stephanie Santoro was first introduced to the Building Knowledge and Breaking Barriers project in the fall of 2018 when she was a student in CCP Professor Joel Tannenbaum's 19th Century US History online class. Professor Tannenbaum shared with his students source sets on topics he had chosen, with sources selected from the PHS archives by archivist Jenny Barr. Stephanie chose to write about the Women and the Anti-slavery Movement source set, focusing on segregation and racism. Stephanie did interesting work in her essay on the intersectionality of race and gender within the abolitionist movement.

Stephanie has continued to explore history through the PHS archives as a BKBB Student Exhibitor.

Excerpt of "Segregation within Abolitionism" by Stephanie Santoro

"Justice and respect for the American person of color, the freed, and still existing slaves was certainly a focus of the movement—but perhaps the tone of charity and pity overpowered the intended sentiment due to racial overtones in even abolitionists minds. Racism and classism couldn’t have fully been shirked. It was said that it was difficult for whites, even abolitionists, to envision a fully mixed society. The mindset of the time was focused on freeing slaves and establishing social reforms for blacks to have access to resources like schools, but it was failing to think of the full picture of what a mixed society would look like after slaves were freed. There was a tone of superiority in the Philadelphia Anti-Slavery Society’s writings that supposed slaves and blacks were mentally, intellectually, and spiritually inferior to whites and that one of their charges as a movement was to lift freed blacks up out of their inferior circumstances (146).1

"In response to the growing lack of meeting spaces for large groups of abolitionists, Pennsylvania Hall was built. It opened on May 14, 1838. Abolitionists both black and white, men and women met, mingled, and gave public speeches to racially mixed and gender mixed audiences. Here seemed to be a place where complete social integration was unapologetically practiced. The Anti-Slavery Convention of American Women was held here three days later, on May 17 and the building was set on fire by anti-abolitionist mobs while the event was still in session. The fire department in Philadelphia did not assist in extinguishing the fire to Pennsylvania Hall as they attended to surrounding buildings (135-137).2 Even though acknowledgment of how race and gender intersect is still something we struggle with today, it can be concluded that women's abolitionist societies in Philadelphia and beyond were working toward accomplishing higher level dialectics and intersectionality. During the era of Reconstruction, post-Civil War, we see a lot of progress for people of color in the United States, and the origins of a first wave of feminism that would not truly get a chance to intersect before Reconstruction ended in 1877.”

See how students used historic photographs from the PHS archives as inspiration for their creative writing. 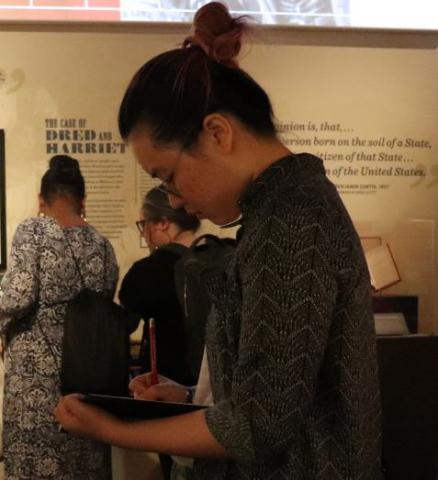 Like her CCP classmate Maya Holman, Celia Shao first came to PHS in Professor Dave Prejsnar's fall 2018 Religion in American History class. Celia was drawn to the First Great Awakening source set and chose to write her research paper on that topic. Focusing on the diverse American religious traditions that came out of the First Great Awakening, Celia carefully analyzed all the sources in the set and then brought her understanding of them to bear in her thoughtfully written essay.

Celia has continued her participation in the BKBB project as a Student Exhibitor.

Excerpt of "What the First Great Awakening Awakened" by Celia Shao

"Because the revival of Protestantism focused on the individual emotional connection to God, it inevitably involved an elaborate and expressive style. Other than painting dramatic images of heaven and hell, the First Great Awakening's preachers, or the New Lights, are often charismatic and eloquent speakers who could easily whip the audience into enthusiasm. For instance, Gilbert Tennent, the passionate Presbyterian preacher, was an ardent evangelist and Christian patriot who knew how to appeal to the sentiments of his listeners and make his pulpit the sounding board for his views (5). He frequently drew direct comparisons between the biblical Pharisees and the ministers who refused to join his cause and incite raucous emotions among his audience with such daring choice of words. In preaching for religious zeal and diligence at a sermon in 1760, he asked his audience: "How diligent is thy grand Enemy Satan, he goes about like a roaring lion, seeking whom he may devour: and wilt thou be less diligent to resist him when thy own salvation is at stake? Less diligent to save thy soul than he to damn it, O horrible!...See the Lord Jesus weeping, sweating, bleeding, groaning, dying, Lo purchase salvation for thee... and canst thou be careless and cold, about thy own salvation? How unaccountable, unbecoming, and ungrateful is this Stupidity? ... Are we colder than Ice, and harder than Adamant (6)?" His words fanned the flames of devotion and rallied large numbers of supporters to his call.

"Similarly, George Whitefield was another extremely persuasive and influential preacher during the First Great Awakening. He advertised his feats in print, hawked his journals, and staged confrontations to attract publicity, gaining unparalleled notice successfully (7). Even Benjamin Franklin, the founding father diplomat who helped draft the Declaration of Independence and who was articulate enough to negotiate the Treaty of Paris, was moved by his address. He recounted his experience of attending Whitefield's sermon in his autobiography: "I perceived he intended to finish with a Collection, and I silently resolved he should get nothing from me. I had in my Pocket a Handful of Copper Money, three or four silver Dollars, and five Pistoles in Gold. As he proceeded I began to soften, and concluded to give the Coppers. Another Stroke of his Oratory made me asham'd of that, and determin'd me to give the Silver; and he finish'd so admirably, that I emptied my Pocket wholly into the Collector's Dish, Gold and all (8)." These ministers drew large crowds from far and wide and boosted church membership significantly. Those denominations that embraced the Great Awakening flourished, like the Methodists and the Baptists. Those that refused to convert consequently withered, such as the Anglicans (9). Most of the changes in church growth and decline are still reflected in the religious landscape today."

Finke, Roger, and Rodney Stark. "Church Membership Has Increased Throughout American History, Especially in the Most Demanding Groups." Approaches to American Religious History, 1992.

Tennent, Gilbert. A Persuasive to the Right Use of the Passions in Religion, or, the  Nature of Religious Zeal Explained. Philadelphia: W. Dunlap, 1760.
PHS Call number: CR Amer 1760 E8745