Presbyterian Mission to the Chinese in California (1850s)

In the era of westward expansion and white settlement on lands bought and seized from Native Americans, a new immigrant group began to arrive in California. Chinese people, including many from Cantonese-speaking regions of Guangdong Province, were drawn to California after gold was discovered in 1848. In the 1860s, Chinese laborers were essential to construction of the transcontinental railroad that connected the vast North American continent. Chinese immigration to the United States continued through the 1880s when the U.S. government bowed to public prejudice against the Chinese and passed the Chinese Exclusion Act of 1882, banning further Chinese immigration for more than 60 years.

At the same time, an American religious revival and growing Protestant evangelical movement fueled missions to Asia, Africa, South America, and the South Pacific in order to spread Christianity and western cultural, moral, and educational values. The Board of Foreign Missions of the Presbyterian Church in the U.S.A. was established in 1837 with the goal of bringing Christianity "to whatever parts of the heathen and anti-Christian world, the Providence of God might enable the Society to extend its evangelical exertions."

Noting the rapid growth in the Chinese immigrant population in California—some estimate that 25,000 Chinese people arrived between 1848 and 1853—the Board sent Reverend William Speer and his wife Elizabeth to establish the first Presbyterian Mission to the Chinese in San Francisco in 1852. William Speer had previously spent four years as a missionary in Guangdong Province and spoke fluent Cantonese. In the first years of the mission, the Speers set up a medical clinic to serve recently arrived Chinese immigrants and laid the groundwork for a mission infrastructure to serve mission stations across California. Subsequent Presbyterian missionaries set up churches, night schools, benevolent societies, and helped train Chinese Presbyterian ministers. The Presbyterian Mission to the Chinese in California continued well into the 20th century.

Please note: the spelling of some Chinese names and places in these sources may be different from those used today. For example, Canton is now called Guangdong. 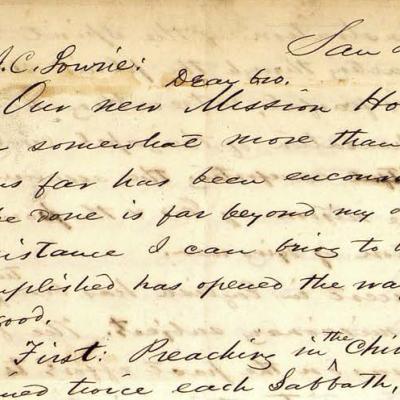 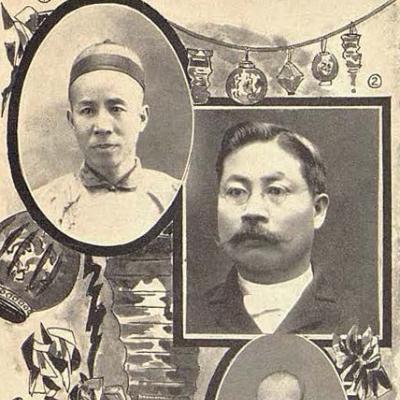 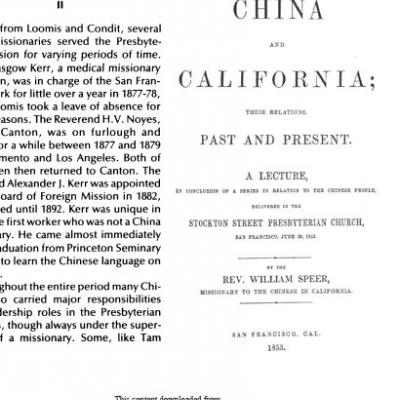